Tips for Running Outside In Winter Safely 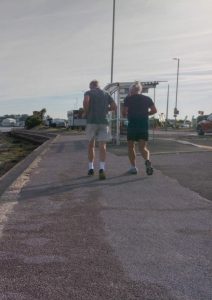 Whilst doing a little research with a couple of running clubs local to me I’ve discovered some disturbing facts.

Running clubs:
Many joggers belong to running clubs which organise small groups, which in itself has many benefits not only from a motivational point of view, but also for safety. This should be of paramount importance for any runner, especially as running for exercise often takes place after work when the light at certain times of the year starts to fail. With most of the running done on pavements close to very busy roads and with drivers hurrying to get home or get to work if you’re an early morning jogger, sometimes drivers fail to watch for pedestrians.

There have been a number of fatalities this year along with some serious injuries; broken bones, neck injuries and more, which even though running in a group you can’t assume protection from.

Running solo: Running outside of an organised club and running on your own accounts for a high percentage of joggers, as your’re not having to fit in with a schedule and you can choose to run at a time to suit.
There is a higher proportion of female (as reported by a variety of club Captains) runners to male and some have experienced harassment causing concern. Having spoken to several female runners that were followed on foot, they were in genuine fear for their safety and have now changed to running in groups.

Sensible precautions for any runner:

• Choose to run during the day if at all possible

• Don’t run (female) with headphones as you will not hear approaching cars, cyclists or someone approaching you. Attackers will always pick a victim who looks vulnerable. Wearing headphones on could make you their target.

• Change your route frequently and always tell a friend or family member your route and approx timing.

• Be visible. This means invest in bright/Hi Vis clothing making you more visible to drivers.

• Carry a mobile with you, there are various accessories available to make carrying one easy. It may come in handy if you are injured from     a slip/fall.

• Try and choose a route which takes you away from busy traffic but not isolated.

• Invest in a GPS tracker which shows a family member or friend exactly where you are running.

Giving a precise location should you get injured or if you are in fear for your safety could mean the difference between life and death. When in need you can press the SOS button for assistance which is relayed to your friend/family members phone.
They are small enough and also waterproof which is ideal for any outdoor activity especially running which can be easily held in your hand, or put in a pocket.
A tracker provides ultimate peace of mind in any eventuality which a mobile cannot do.

Shop now and have guaranteed delivery for Xmas.